The Daily Post’s weekly photo challenge is “State of Mind.” Our state of mind when we take our photos can be glimpsed from the photo itself. This is a snap of a natural water slide at Ohiopyle State Park in lower Pennsylvania. We did watch some kids ride the ‘slide’ but my state of mind while taking this photo was indecision. It looked like so much fun but we are talking about rushing between hard rocks on this slide. I just wasn’t sure if these old bones would take that jolting around and still let me walk away at the end 🙂

So, if you are wondering — I didn’t do it. We watched the teenagers ride it and lived vicariously through them.

How about you? Would you have ridden this natural water slide?

To check out my last photo challenge, click Weekly Photo Challenge: A New Spring in My Life.

This may be the current season where I live, but like winter I am feeling excited to wake up and grow under the sun’s warmth. There are about to be some major changes in my personal life, including a long distance move from a cold climate to a much warmer climate. My family and I are looking at these changes in our lives as a new and exciting adventure.

I feel as if this change will be a new spring in my lifetime; a time of rebirth and renewal.

What season are you in (physically or metaphorically) ?

Yesterday began the Chinese Year of the Monkey. Are you a monkey? Don’t know your Chinese Zodiac animal – click here to find out. I’m a dragon 🙂 Dragons are witty, intelligent and lively but lean toward arrogant and impatient. They are also sensitive, ambitious and romantic.

I want to wish everyone a prosperous and happy new year!

Over the past two years I’ve written several posts around Chinese subjects.

Here are a sample:

If you’ve been following my blog, you know I have always loved martial arts and romance novels. In 2015 my debut novel, Hong Kong Treasure, was published.

Now, can a handsome Chinese stranger save her

from the danger she has forgotten?

Leyte Province in the Philippines. Her running steps echoed from the walls. Would he catch her? It meant white slavery if he did. Slamming open the kitchen door, she burst out of the hotel despite the typhoon ravaging the eastern coast. The destructive winds and rains were buffered in the alleyway behind the hotel, but she still had to fight for each step away from the man she knew was just behind her.

Without warning, massive walls of water rushed into the alley from both ends. The sixteen-foot wave scooped her up and battered her against the buildings. When the storm surge receded, she lay bruised and unconscious beneath a mass of water-logged debris.

Thanks to my friend Marje (Kyrosmagica) who put me on to these cute, fun Bitmojis. 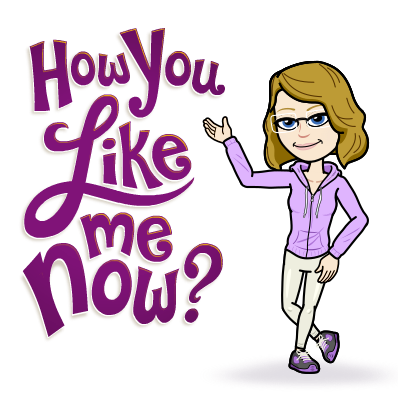 Since this photo was taken, I’ve changed my glasses to rimless ones.

What do you think? Have you discovered bitmojis yet?